alaTest has collected and analyzed 407 reviews of Canon PowerShot A580. The average rating for this product is 4.3/5, compared to an average rating of 4.3/5 for other Digital Compact Cameras for all reviews. People are impressed by the image quality and portability. The performance and price also get good feedback. Some have doubts about the sensor and shutter, and comments about the exposure and image stabilizer are different.

We analyzed user and expert ratings, product age and more factors. Compared to other Digital Compact Cameras the Canon PowerShot A580 is awarded an overall alaScore™ of 88/100 = Very good quality.

Below is a list of reviews for this or similar products. If you think this grouping is wrong please click here to flag.
Read more on our FAQ’s page.
Showing 1 - 201 of 287 Show Reviews: in English | in other languages (71)

alaTest has collected and analyzed 27 user reviews of Canon PowerShot A580 from Amazon.co.uk. The average user rating for this product is 4.0/5, compared to an average user rating of 4.3/5 for other Digital Compact Cameras on Amazon.co.uk. Opinions about the portability and durability are overall positive. The image quality and battery also get good comments, whereas there are some negative views about the storage and low light performance.

alaTest has collected and analyzed 164 user reviews of Canon PowerShot A580 from Amazon.com. The average user rating for this product is 4.2/5, compared to an average user rating of 4.2/5 for other Digital Compact Cameras on Amazon.com. Reviewers are impressed by the image quality and performance. The portability and price also get good views. Many are negative about the shutter and sensor.

90% of the reviews on Amazon.com give this product a positive rating.

Does a cheap price tag equal cheap results? We hope not...

This is an excellent starter camera. User intuitiveness could be a little better, but all in all thumbs up.

Printing is easy with the Canon PowerShot A580, simply connect the camera to a PictBridge compatible printer and great quality photographic prints are yours at the touch of a button.

This is a far better camera than it looks, yes it does use a pair of standard ‘AA' batteries and the shape and styling is far from up to date but the resolution is fine and the zoom good.

The Canon PowerShot A580 is 9x6.5x3.5cm, the last figure is maximum and only applies at the right side where the pair of 'AA' batteries are. When the lens is extended in use the total width is 6.5cm. The plastic case is a silver/grey colour with the...

A combination of good picture quality and value for money is always likely to be a winner. The Canon Powershot A580 offers both. This is a 7 megapixel starter camera with a 4x optical zoom lens.

GH Good Deal. Good points: High score for image quality. Larger size makes it ideal for people with less nimble fingers. Straightforward to use. Smooth zoom. Drawbacks: No internal memory but comes with a 32Mb card. Quite loud when zooming. Heaviest of...

Sporting an 8-megapixel sensor and a low price tag, Canon's latest PowerShot model is another solid entry-level advanced camera. While it does little ...

Some colour issues, noise a little higher than normal

A solid entry-level camera, the Canon PowerShot A580 takes good shots and offers most of the features a beginner needs at an affordable price. 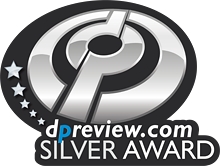 The Sony DSLR-A580 is near-identical in terms of design and operation to its predecessor the DSLR-A550, and in terms of image quality very similar to its sister-model the SLT-A55. For this review we have therefore slightly shortened our usual review...

The Sony DSLR-A580 is an excellent all-round performer but also offers a range of innovative features. It's a great alternative to more 'traditional' DSLRs and Sony's unique dual live view system makes it the ideal compromise for those who like the...

In general, it's best not to expect too much from a budget camera: the 8-megapixel Canon PowerShot A580 exemplifies this philosophy. Sure, it's got a clunky design, feels cheap, and doesn't have all the latest features (in fact for about the same price...

It's slow and unglamorous, but the Canon PowerShot A580 captures good pictures at a low price.

The Canon PowerShot A580 is a fine entry-level point-and-shooter, but for $30 more you can get the nearly identical A590 IS, which adds image stabilization and manual controls.

Inexpensive, even for an entry-level camera. Face detection.

Price comparison for Canon PowerShot A580