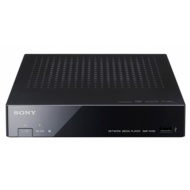 alaTest has collected and analyzed 178 reviews of Sony SMP-N100. The average rating for this product is 3.6/5, compared to an average rating of 4.2/5 for other products in the same category for all reviews. Comments about the reliability and design are overall positive. The price and size also get good opinions.

We analyzed user and expert ratings, product age and more factors. Compared to other products in the same category the Sony SMP-N100 is awarded an overall alaScore™ of 90/100 = Excellent quality.

Below is a list of reviews for this or similar products. If you think this grouping is wrong please click here to flag.
Read more on our FAQ’s page.
Showing 1 - 11 of 160 Show Reviews: in English | in other languages (18)

Turn your dinosaur of a TV into a multimedia-streaming, Bravia Internet Video-enabled, high-tech dream machine with this nifty set top box from Sony

The box looks rather utilitarian ; Codec support not totally comprehensive ; Only one USB port

There's room for improvement with the N100, certainly, and you might also consider that you can get Sony Blu-ray players offering broadly similar functionality for - in the case of the Sony BDP-S480 - only around £50 more. However, if £100 is your...

Lacks internet radio ; Some file types have to be ported in via USB port

Appealing, and as close to 'fit and forget' as streamers get

There must be plenty of readers who have spent the best part of a grand on a cutting-edge full HD TV, only to discover that its replacement model is ‘network-enabled'. Increasingly popular, this feature enables you to stream video from various...

Lacks internet radio; some file types have to be ported in via USB port

Expert review by : Steve May (pocket-lint.com)

The SMP-N100 is Sony's first dedicated IPTV and network media player. Once the exclusive province of relatively esoteric PC brands, this sector of the market is now being groomed by the big TV makers, which means a whole new tranche of telly-watchers...

Limited file support when it comes to network streaming, only really of use if you intend to feed it media files directly via front-mounted USB

As a straight (non IPTV) media streaming device the SMP-N100 falls short. An inability to play popular formats over a network make the N100 a runner-up in a streaming race currently dominated by devices like the WD TV Live

Apple TV aside, most media streamers are aimed at knowledgeable enthusiast, not first-timers. So which camp does Sony's SMP-N100 belong to?

For first-timers or easy-lifers, the Netbox is great, but if you’re more knowledgeable it’ll frustrate as much as it delights

One of our favourite features of Sony's TVs and Blu-ray players is their network playback capability. They're also equipped with Sony's Bravia Internet Video service, which allows you to catch up with TV shows, download movies and use the company's...

Only one USB port and it's not brilliantly placed.

The Sony SMP-N100 networked media streamer gets pretty much everything right. Its codec support could be more comprehensive, but its Internet features really shine.

The Sony SMP-N100 USB media player is Sony's answer to digital video streamers such as the Western Digital WD TV Live. When connected to a USB storage device, the Sony SMP-N100 will play pretty much any video file you care to throw at it. It can also...

The Sony SMP-N100 is an HD media player that can wirelessly stream content from a PC to a TV over your home network. While it's price is a little on the steep side, it remains a reliable and user-friendly product.

The Sony SMP-N100 is an HD media player that can wirelessly stream content from a PC to a TV over your home network. While its price is a little on the steep side, it remains a reliable and user-friendly product.

Sony's SMP-N100 streaming-video box isn't the easiest to use, but it offers an unparalleled feature set at its price.