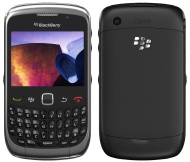 alaTest has collected and analyzed 168 reviews of BlackBerry Curve 9330. The average rating for this product is 3.3/5, compared to an average rating of 4.1/5 for other Cell phones for all reviews. People really like the camera and portability. The performance and usability also get good feedback. There are mixed views on the screen and battery, and the size and reliability get critical reviews.

We analyzed user and expert ratings, product age and more factors. Compared to other Cell phones the BlackBerry Curve 9330 is awarded an overall alaScore™ of 82/100 = Very good quality.

Below is a list of reviews for this or similar products. If you think this grouping is wrong please click here to flag.
Read more on our FAQ’s page.
Showing 1 - 139 of 150 Show Reviews: in English | in other languages (2)

alaTest has collected and analyzed 129 user reviews of BlackBerry Curve 9330 from Amazon.com. The average user rating for this product is 3.2/5, compared to an average user rating of 3.8/5 for other Cell phones on Amazon.com. Reviewers really like the battery and portability. The usability and performance are also appreciated. Many are critical about the size and reliability. Comments are divided on the screen.

62% of the reviews on Amazon.com give this product a positive rating.

The BlackBerry Curve 3G 9330 only has EV-DO Rev. 0, the microSD card slot is located behind the battery cover, and photo quality is mediocre.

The BlackBerry Curve 3G 9330 is a very affordable entry-level smartphone with a solid feature set and great call quality.

The BlackBerry Curve 3G 9330 is a minor spec bump designed to make the popular Curve ready for the new OS 6.

The RIM BlackBerry Curve 3G 9330 for Verizon Wireless isn't very different at all from its predecessor, the Curve 8530 . Indeed, the only changes seem to be cosmetic, and even then the changes are slight. You still have the media keys on the top, the...

The BlackBerry Curve 3G 9330 is not too different from the Curve 8530 aside from a few cosmetic changes. Photo quality is poor.

Despite its entry-level status, the RIM BlackBerry Curve 3G 9330 is a decent smartphone for the price.

The BlackBerry Curve 3G 9330 only has EV-DO Rev. 0, the microSD card slot is located behind the battery cover, and photo quality is mediocre.

The BlackBerry Curve 3G 9330 is a very affordable entry-level smartphone with a solid feature set and great call quality.

Waiting for the BlackBerry 6 operating system

The new Blackberry Curve 9330 is the offspring of consumer suggestions and technological innovations deriving from the 8530, a popular Blackberry model. The new 9330 has an updated QWERTY keyboard and new shell, and is the perfect model for a consumer...

It was the best of times and the worst of times for the BlackBerry Curve line. With the Curve 3G RIM has made a solid, attractive and keenly affordable entry tier BlackBerry smartphone that's OS 6-ready, but alas it doesn't yet ship with OS 6. So you...

The BlackBerry Curve 3G 9330 on Verizon is a solid entry level BlackBerry with better than average looks for a Curve and a wonderfully low price. While the specs won't send you to the upgrade hotline if you're a current Curve user, the phone is better...

Research In Motion refreshed the Curve line with the 9330 Curve 3G, which is offered by Verizon Wireless. The Curve 3G has a better keyboard, but the same display and camera as its predecessors.

It's great phone for chatting, texting, email, social media and storing music and videos. If you want a phone where you can use FB, twitter, Gmail, etc, listen to your music and chat, and you won't be disappointed

Camera with no flash