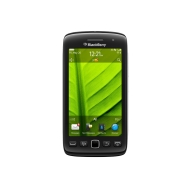 alaTest has collected and analyzed 938 reviews of BlackBerry Torch 9860 / BlackBerry Monza / Blackberry Touch. The average rating for this product is 3.7/5, compared to an average rating of 4.1/5 for other Cell phones for all reviews. People really like the size and design. The screen and performance also get good reviews. The reliability and battery get less positive views, while there are some mixed views about the reception.

Below is a list of reviews for this or similar products. If you think this grouping is wrong please click here to flag.
Read more on our FAQ’s page.
Showing 1 - 532 of 715 Show Reviews: in English | in other languages (164)

alaTest has collected and analyzed 51 user reviews of BlackBerry Torch 9860 / BlackBerry Monza / Blackberry Touch from Amazon.co.uk. The average user rating for this product is 3.9/5, compared to an average user rating of 4.1/5 for other Cell phones on Amazon.co.uk. Reviewers really like the portability and performance. The screen and design also get good views, whereas the reliability and battery get mixed views.

78% of the reviews on Amazon.co.uk give this product a positive rating.

alaTest has collected and analyzed 467 user reviews of BlackBerry Torch 9860 / BlackBerry Monza / Blackberry Touch from Amazon.com. The average user rating for this product is 3.7/5, compared to an average user rating of 3.8/5 for other Cell phones on Amazon.com. People really like the screen and portability. The size and price are also mentioned favorably, whereas comments are divided on the usability. There are some less positive views about the sound and reliability.

75% of the reviews on Amazon.com give this product a positive rating.

The BlackBerry Torch 9860 is a 3.7-inch touchscreen smartphone, sweeping aside the Storm name to give RIM another crack at a keyboardless device. It arrives with BlackBerry OS7, the same as the BlackBerry Bold 9900 which we reviewed recently, but...

Some areas of the BlackBerry Torch 9860 feel a little antiquated as a consumer device. Diving into the menus you still need to "save" as you make changes. We also can't help feeling that, although the sliding app tray, and the choice of homescreen...

Lack of polish in OS ; Difficult keyboard ; GPS issues ; Browser is still below average ; Too pricey

It's taken a ridiculously long time to come, but this is it. This is the one. After the clickable screen of the BlackBerry Storm 2 and the touchscreen-with-slide-out-keyboard shenanigans of the original BlackBerry Torch, RIM has finally released a...

RIM's first forays into the full touchscreen world were more of a damp shower than the unaptly-named Storm and Storm 2 phones would have you believe. But that's all set to change with the release…

A good, mould-breaking BlackBerry that's great for business and pleasure

Research In Motion's BlackBerry handsets are known for marrying a screen and small but very usable keyboard. They are the darlings of the business world and of the youth market, which makes copious use of the BlackBerry Messenger service. Forays into...

Overall, RIM may have done too little with the Torch. It offers the same core features as other BlackBerry 7 smartphones, but the single home screen looks bare when compared to the multiple-screen, widget-supporting offerings of competitors.

BlackBerry is still best known for its secure email capabilitiesand excellent QWERTY keyboards, but BlackBerry manufacturer RIM has been working hard to make itsmark in the touchscreen arena with some, if limited, success.

BlackBerry's biggest touchscreen handset is one of its best, andit's working hard to catch up with the competition. The BlackBerryfaithful will appreciate the effort here, but whether it's enoughto win over fans of Android or Apple is another matter.

It was Friday when I received a rather large package addressed to me. Inside, the Blackberry Torch 9860. First up, I've got to admit that I absolutely love this handset. I have had plenty of time to have a little play and a fiddle with this device, so...

Blackberry have managed to create another stunning device in its own way. It’s not really an Android or iPhone killer but I still love the device. The whole form factor that makes the Torch 9860 very different to other handsets, with so many key...

Review RIM's efforts to create a purely touchscreen device haven't exactly been the most successful departure for the BlackBerry maker. Yes, the Storm [1] handsets had their fans but they were simply not good enough to halt RIM's market share migration...

Is the BlackBerry Torch 9860 good enough to arrest RIM’s decline? On balance I'd say, yes. It’s fast, well made and mercifully free of dependency on the likes of Zune or iTunes. The UI may not be the last word in cool but it works well enough and media...

RIM takes another stab at a touchscreen-only smartphone, but has the Torch 9860 caught up with the competition or has it already fallen behind the pack? Julian Prokaza finds out in our review.

The lack of a physical keyboard may limit the appeal of the Torch 9860 to some existing BlackBerry users, but RIM has done a reasonably good job at copying what the iPhone has to offer, even if it is now effectively a generation behind Apple with both...