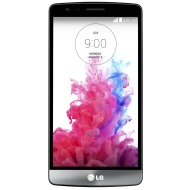 alaTest has collected and analyzed 1132 reviews of LG G3 S. The average rating for this product is 3.8/5, compared to an average rating of 4.1/5 for other Cell phones for all reviews. Views about the reliability and screen are generally positive. The battery and performance are also appreciated, but there are some mixed comments about the camera. There are some critical opinions about the portability and durability.

We analyzed user and expert ratings, product age and more factors. Compared to other Cell phones the LG G3 S is awarded an overall alaScore™ of 88/100 = Very good quality.

Below is a list of reviews for this or similar products. If you think this grouping is wrong please click here to flag.
Read more on our FAQ’s page.
Showing 1 - 442 of 551 Show Reviews: in English | in other languages (186)

83% of the reviews on Amazon.co.uk give this product a positive rating.

67% of the reviews on Amazon.com give this product a positive rating.

and LG G2 would make strong, Full HD, alternatives in the sub-£250 space.

LG has enjoyed plenty of success with its flagship smartphones of late, and the LG G3 S wants to capitalise on this, offering a mini take on flagship design. The LG G3 S offers something of a mixed bag and fails to impress like its flagship bigger...

The LG G3 S offers something of a mixed bag and fails to impress like its flagship bigger brother.

LG announced a smaller version of its LG G3 back in July and among plenty of exciting gadgets including the LG G Watch R, the LG G3 s made an appearance

A cut down LG G3 in more than just size

A smaller LG G3 makes sense, but the G3 S is cut-down in every respect without cutting the price quite enough to make it a good deal.

It's a trend that's been taking shape for some time, but the small flagship smartphone is well and truly dead in 2014 and the LG...

If you’re after a premium user experience, the LG G3 S can undoubtedly deliver. It also packs a contemporary design and number of helpful and handy features; it just a shame that the end result isn’t particularly memorable..

The LG G3 S has a near-identical look to its flagship big brother, but has a smaller screen and runs on low-end tech.

The LG G3 S has the same attractive styling as its big brother, its camera can take good shots and the laser-assisted autofocus is quick to lock on to your subject.

Its processor puts in a very poor performance, its screen resolution doesn't impress, it comes with a pitiful amount of storage and it's running on an old version of Android KitKat.

The LG G3 S may come with the same name and physical design as its flagship brother, but the similarities are only skin deep. The G3 S's specs have been watered down in every way, making this little more than a low-end phone in a high-end body with a...

The LG G3 S doesn't have an official price from LG yet, but thanks to its appearance on Mobile Fun for pre-order, we know to expect a price tag around the £300 mark, matching the price of the Google Nexus 5.

The LG G3 S is a very good-looking phone with specs and features that'll suit most users, but at £299 it doesn't weigh up too well with the similarly priced Nexus 5, which is actually also made by LG, which has a better processor, better display and...

Drawing inspiration from its flagship brethren, the LG G3 Beat is a great all round performer that hits all the right mid-range notes.

Solid all round performance; A smaller carbon copy design of the flagship G3; Well priced

A propensity to heat up under heavy use

The small (S) version of LG's G3 hero phone retains the distinctive style while cutting the price pretty much in half. But has LG cut too much to make it worth your while?

Battery life not as good as it could be, spec struggles to distinguish itself against similarly priced rivals

Can LG compete against some tough competition in a crowded market?

The G3 S may look like a smaller G3, but it doesn't quite live up to LG's flagship device.