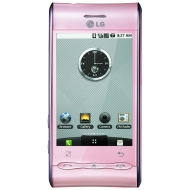 alaTest has collected and analyzed 1265 reviews of LG GT540 Optimus / LG GT540 Swift / LG Loop GT540. The average rating for this product is 3.5/5, compared to an average rating of 4.1/5 for other Cell phones for all reviews. Views about the design and price are on the whole positive. The performance and size are also appreciated. There are mixed comments on the durability and reliability. There are some negative opinions about the reception and sound.

Below is a list of reviews for this or similar products. If you think this grouping is wrong please click here to flag.
Read more on our FAQ’s page.
Showing 1 - 328 of 590 Show Reviews: in English | in other languages (206)

alaTest has collected and analyzed 33 user reviews of LG GT540 Optimus / LG GT540 Swift / LG Loop GT540 from Amazon.co.uk. The average user rating for this product is 3.5/5, compared to an average user rating of 4.1/5 for other Cell phones on Amazon.co.uk. People are impressed by the screen and price. The usability and performance also get good comments, whereas many are less positive about the reliability.

alaTest has collected and analyzed 285 user reviews of LG GT540 Optimus / LG GT540 Swift / LG Loop GT540 from Amazon.com. The average user rating for this product is 3.4/5, compared to an average user rating of 3.8/5 for other Cell phones on Amazon.com. People are impressed by the design and performance. The usability and portability are also appreciated. There are mixed views on the screen and reliability, while some have doubts about the battery and reception.

70% of the reviews on Amazon.com give this product a positive rating.

Has LG's Optimus GT540 handset got the firepower to smash other low-end Android handsets?

First announced at the CES tech show in Las Vegas, the LG Optimus GT540 forms part of the Korean brand's lineup of Android handsets and is largely targeted at first-time smartphone users. Considering that this is a mid-range phone, the finish is...

Although it is let down by its resistive touchscreen and the somewhat dated Android 1.6 OS, the LG Optimus T540 is still a good choice for first-time smartphone users, thanks to its slick design, multimedia support and large screen.

Touchscreen not responsive ; Screen is small ; Web browsing is tricky ; Android 1.6 is behind the times ; UI lags at times

The LG Optimus GT540 is LG's latest shot at an Android smartphone, and the company's second to hit the UK. The last Android offering – the inTouch Max GW620 – came with a slide-out keyboard, but this time the keyboard has gone.

Although it's good value, the sleek Optimus has an out-of-date version of Android, and LG hasn't done much to improve on the basic interface

The LG Optimus GT540 may be aimed at users on a budget, but its build quality and design haven't suffered because of this. It has sleek curved edges at the top and bottom, and the silver version we reviewed has an attractive metallic-looking finish....

The LG Optimus GT540 is a fully featured Google Android smartphone hindered by a resistive touchscreen. It represents decent value at this price, provided you can live with its flaws.

A memory card is needed to operate the camera. The fact that LG hasn?t included one in the box is a sin

To me this looks a very stylish piece of kit. A brushed metal silver grey item with a large touch screen surely a must have for anyone who wants to look the part. However being down to earth my question is does it do the job?

Doing my searches found this LG Orange unit available from the link below, with three separate differently specified deals offering it free for £15 a month on a 24 month contract

You won't find an Android-based handset for much less money than the LG Optimus GT540. It is free on contract for as little as £12 a month and costs £100 SIM-free. It is widely available too: ...

The LG Optimus GT540 has several features which belie its budgets status. The build is good, and you can use a skinned version of Android. The resistive screen is an obvious budget move, though, and Android 1.6 means you don't get access to the latest...

The LG Optimus GT540 is a fully featured Google Android smartphone hindered by a resistive touchscreen. It represents decent value at this price, provided you can live with its flaws.