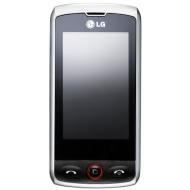 alaTest has collected and analyzed 167 reviews of LG GW520 / LG GW520 Cookie 3G / LG GW525 / LG GW520 InTouch Plus / LG Calisto. The average rating for this product is 3.4/5, compared to an average rating of 4.1/5 for other Cell phones for all reviews. Views about the camera and portability are overall positive. The performance and price are also appreciated, but the sound and durability get less positive views.

Below is a list of reviews for this or similar products. If you think this grouping is wrong please click here to flag.
Read more on our FAQ’s page.
Showing 1 - 11 of 86 Show Reviews: in English | in other languages (67)

0% of the reviews on Amazon.co.uk give this product a positive rating.

Looking for a low cost phone with a slideout keyboard? LG might have you covered.

It's more stylish Cookie than clever Arena, but the GW520 feels underpowered where it counts

Over the past couple of months we have seen a bunch of phones with full qwerty keypads aimed at regular users. These include the Samsung Corby TXT and the CorbyPRO and now the LG GW525. If you engage in heavy messaging throughout the day, then this is...

The LG GW525 appears expensive when compared with similarly priced phones. It has that excellent keyboard and touchscreen, and enjoys decent media playback, but we don't like the sluggish interface, the camera is awful and there are too many high-end...

The Qwerty keyboard is designed to have you social networking your socks off, although there's few other things about the GW520 that might put you off.What we likeThere's an excellent keyboard on the…

Overall the LG GW520 is a nice feature phone. I'm not sure how many people would get this on a contract but as a PAYG phone its a real bargain if you ask me. The keyboard is not as good as on the high end smartphones but its still good.

Comfortable to hold, not bulky, grip feels great, reasonable weight, Well designed, nicely laid out full sliding QWERTY keyboard, microSD slot accessible from the outside rather than inside like some LG phones in the past, Reasonable price range

Some may find the look / colours less attractive, Small screen for comfortable multimedia purposes, Lack of WiFi, Limited onboard factory applications preloaded (though Java apps are relatively easy to find), Has Google applications but no Google maps,...

We review the LG GW520, that could be described as a Cookie with a keyboard

No Wi-Fi ; Not very responsive touch screen ; No flash or autofocus

The biggest mobile players insist that social networking on-the-go is where it's at these days. To be fair, with iPhone apps and INQ phones, it's difficult to argue. The LG GW520 is the Korean mobile maven's latest stab at such a device, aimed largely...

A decent fist time social networking phone, but one to be avoided by touchscreen lovers

QWERTY is how the Cookie crumbles and LG are quite keen to build on a winning concept. And they sure didn't work themselves to the bone. When you've got a Best Handset nominee (LG KS360) and a mid-range bestseller (LG KP500)...

No Wi-Fi ; Video recording no good at QVGA@12fps ; Camera has no auto focus or flash ; No DivX/Xvid video support ; No standard 3.5mm audio jack ; Facebook is the only social networking app and it lacks Push

Wi-Fi support would have gained the GW520 lots of extra points against the competition. But then, that would’ve involved so much smartphone pressure, which the GW520 is definitely not prepared to handle. In a way, the handset can be construed as a...