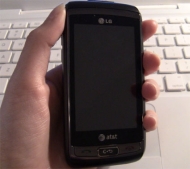 alaTest has collected and analyzed 21 reviews of LG Vu Plus. The average rating for this product is 3.7/5, compared to an average rating of 4.1/5 for other Cell phones for all reviews. Reviewers really like the durability and camera. The screen and usability also get good comments. There are some mixed reviews about the design. Some have doubts about the battery and price.

We analyzed user and expert ratings, product age and more factors. Compared to other Cell phones the LG Vu Plus is awarded an overall alaScore™ of 79/100 = Good quality.

Below is a list of reviews for this or similar products. If you think this grouping is wrong please click here to flag.
Read more on our FAQ’s page.
Showing 1 - 11 of 20 Show Reviews: in English | in other languages (1)

The LG Vu Plus offers up superb mobile TV and plenty of other data features, though it's a tough sell against a genuine smartphone.

When AT&T Mobile TV launched two years ago, the LG Vu was one of AT&T 's launch devices for the live mobile TV service. The Vu had a lovely 3-inch display, and it even had a pull-out antenna to further amplify its television reception. Still, the...

The LG Vu Plus has a capacitive touch-screen display and a full QWERTY keyboard. Features include a 3.0-megapixel camera, GPS, stereo Bluetooth, and AT&T Mobile TV.

The lack of a 3.5mm headset jack is disappointing, and we wish the keys weren't so close together. The photo quality could be improved as well.

Despite a few design issues, the LG Vu Plus is a full-featured messaging phone with the bonus of live mobile television.

When AT&T Mobile TV launched two years ago, the LG Vu was one of AT&T 's launch devices for the live mobile TV service. The Vu had a lovely 3-inch ...

The LG Vu might have been one of the originals to help aid the ball rolling for touchscreen devices on AT&T's lineup, but since its initial release almost 3 years ago, there are probably plenty of owners who are now ready to do an upgrade. Last year,...

Messaging phone with mobile TV pricier than meets the eye

PCMag.com's Jamie Lendino says that while the LG Vu Plus is more powerful than the original Vu, AT&T's required $20-per-month data plan works against it -- especially in light of the general drop in price of smartphones. The Vu Plus sports a...

The LG Vu Plus is one of the only phones that works with AT&T's Mobile TV service, but does that make it entertaining? Find out in our review.

Overview The Good: 3MP camera with fun editing features; physical keyboard; shortcut keys on the the keyboard come in handy. The Bad: Lag when scrolling through homescreens and menus; battery didn't last very long; still had a few...

Lag when scrolling through homescreens and menus; battery didn't last very long; still had a few problems with the touchscreen even though it is capacitive

From the start, I had mixed feelings about the LG Vu Plus. It has a lot of potential and comes with great features, but it doesn't perform very well. In the end, I guess it's all about performance. The camera is great and the keyboard may be to others'...

"By far, the worst phone I have ever had in my life"

This phone was sent to me as a "comparable replacement" for the Samsung Impression, which was far superior in every respect. It is not comparable in the slightest, and was only sent to me because the insurance company did not want to give me a good...

*a cricket chirps in the background*

The touch screen is too small for my fingers.

Price comparison for LG Vu Plus