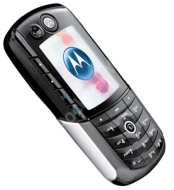 alaTest has collected and analyzed 198 reviews of Motorola E1000. The average rating for this product is 3.8/5, compared to an average rating of 4.1/5 for other Cell phones for all reviews. People are impressed by the usability and performance. The camera and screen also get good reviews, but there are some mixed reviews about the battery.

We analyzed user and expert ratings, product age and more factors. Compared to other Cell phones the Motorola E1000 is awarded an overall alaScore™ of 82/100 = Very good quality.

Below is a list of reviews for this or similar products. If you think this grouping is wrong please click here to flag.
Read more on our FAQ’s page.
Showing 1 - 22 of 33 Show Reviews: in English | in other languages (159)

92% of the reviews on Amazon.co.uk give this product a positive rating.

Motorola's latest 3G handset on the 3 network is a feature packed, multimedia device that should suit all the gadget fiends out there.

As if it was straight out of a Jekyll and Hyde story, the e1000 compared to the A1000 is a gem to use. It's small, compact and dispels the belief that 3G phones have to be big and clunky. More to the point, all the features that you would want from a...

For Motorola the E1000 became a shock offer on the European UMTS market. At the announcement moment the specifications of the device differed from usual ones so greatly that many customers considered the model de-facto interesting and successful....

The design of the phone is rather strict; there is a VGA camera gap near a loudspeaker, it serves for videocalls. The screen taking the majority of the body is 262K with the resolution of 240x320 pixels (36x45 mm). The picture is very vivid and the...

The Motorola E1000 is a slick looking black candy bar style handset which is best described as a mid-range phone. The phone is available on 3 and Vodafone. Our review covers the Vodafone model E1000. The review is supported by a number of relevant...

Motorola has applied its rediscovered sense of style in spades to the latest addition to the local 3G phone stable, the E1000.

Overall, the E1000 is a good performing handset that's sure to turn heads. It's another design winner from Motorola that packs decent performance and specs.

Taking a look back at my time with the E1000, I have to admit I was overly impressed with the handset. Even though it does have its faults, it's one of the best handsets I've had the pleasure to review. The feature list is impressive and the handset...

Motorola E1000 is a nice, compact phone with advanced functionality and high-speed 3G network connectivity. You can set up a video call with a friend who has a compatible phone, and you'll see his or her live picture and your friend will see live video...

Value for money: This model is good value for an advanced 3G phone. The Transflash memory card instead of the more popular SD or MMC is a questionable choice, but an adapter is available. Try to make sure you get the latest version of the phone for...

The Motorola E1000 is one of the most advanced multimedia 3G handsets to date featuring video and push to talk functionality combined with an ultra-high resolution 1.2 megapixel camera, video playback and twin 3D stereo speakers.

I think that aside from a couple of minor issues such as the SMS lag and the occasional 'missing' memory card, the Motorola E1000 is a rather reliable product which I have no problem recommending if you are looking for a device in this category.