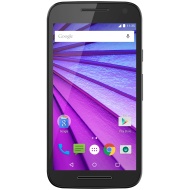 Below is a list of reviews for this or similar products. If you think this grouping is wrong please click here to flag.
Read more on our FAQ’s page.
Showing 1 - 1689 of 4531 Show Reviews: in English | in other languages (646)

alaTest has collected and analyzed 535 user reviews of Motorola Moto G (2015, 3rd Gen) / G3 (XT1540, XT1541, XT1542) / G3 Dual SIM (XT1543) from Amazon.co.uk. The average user rating for this product is 4.5/5, compared to an average user rating of 4.1/5 for other Cell phones on Amazon.co.uk. People are impressed by the portability and screen. The usability and price are also mentioned favorably. There are some mixed comments about the reliability.

alaTest has collected and analyzed 1113 user reviews of Motorola Moto G (2015, 3rd Gen) / G3 (XT1540, XT1541, XT1542) / G3 Dual SIM (XT1543) from Amazon.com. The average user rating for this product is 4.2/5, compared to an average user rating of 3.8/5 for other Cell phones on Amazon.com. People are impressed by the camera and portability. The usability and price are also mentioned favorably. The social networking functionality and GPS navigation get critical reviews. Comments are divided on the connectivity.

85% of the reviews on Amazon.com give this product a positive rating.

alaTest has collected and analyzed 31 user reviews of Motorola Moto G (2015, 3rd Gen) / G3 (XT1540, XT1541, XT1542) / G3 Dual SIM (XT1543) from Amazon.ca. The average user rating for this product is 2.4/5, compared to an average user rating of 3.9/5 for other Cell phones on Amazon.ca. Reviewers really like the battery and usability. The durability and performance also get good feedback, but the camera and reliability get critical comments.

35% of the reviews on Amazon.ca give this product a positive rating.

The Moto G has been our no.1 budget smartphone for the past two years. The third version still aims to give you great value for money and an untarnished Android experience, but Motorola has given it a few new tricks. It's water resistant now, and you...

Low-light photos only average ; Not as cheap as its predecessors

When the original Motorola Moto G arrived back in September 2013, it shook up the smartphone market from top to bottom. It didn't just make people realise a smartphone a fifth the price of a flagship could offer decent performance, it also forced the...

Average display, some slight performance hiccups, additional camera features could be handy, design still on the chunky side

It's easy to look at specs and compare the third-gen Moto G to similar devices, but this phone isn't about numbers, it's all about the experience. And as affordable experiences go, it's a true return to the top.

Motorola has updated its budget smartphone range - the Moto G - just three months after the last addition to the line. The Moto G originally launched in

Motorola's cut-price smartphone is better than ever before, but more expensive too

When the original Moto G was unveiled back in 2013 it blew other budget phones out of the water. Its 2014 follow-up threw its weight at a larger screen size and, bizarrely, ditched 4G connectivity in the process. That's where the Moto G 2015 comes in...

Motorola truly impressed us with the original Moto G, a budget smartphone that, at launch, was untouchable. But its larger-scale and slightly more expensive follow-up was a little less impressive due to a bulkier design and lack of 4G.

The best budget handset around

A stunning phone for very little money - poorer camera aside, it's the perfect PAYG phone. You won't get a better budget blower than the Moto G.

With various upgrades including a waterproof design, great cameras and stock Android, the new Moto G 2015 is a great affordable phone. The device is still a bit chunky and it's a shame to see the stereo speakers gone. It's worth opting for the model...

We re-review the Motorola Moto G3, a.k.a. Moto G 3rd Generation in 2016, a full year after its release, to see if it's still one of the best-value budget mobile phones around.The first Moto G phone (now…

New model about to launch

The Moto G 4th-Generation might be about to launch, but last year’s handset is still a steal at well under £200 SIM-free. Of course, it’s likely to drop in price come next month when the latest Moto G is unveiled by Motorola, so try and hang on if you...

We go hands on with the new Moto G 3 (2015), which packs some massively updated flagship-quality camera tech and a fresh new water-resistant body.

The 3rd-generation Moto G is a solid budget handset, with a brilliant premium-spec camera and thankfully smooth performance. The 5-inch screen may not be as razor-sharp as we’d hoped, but for anyone who loves snapping every moment of their everyday...

The new Moto G for 2015 is an impressive, almost budget phone which feels nice in the hand and has decent specs for the price. Although the screen is still 720p, the upgraded cameras look to be better than rivals and we like that you can customise the...