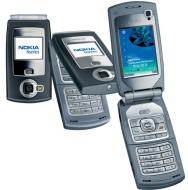 alaTest has collected and analyzed 141 reviews of Nokia N71. The average rating for this product is 3.9/5, compared to an average rating of 4.1/5 for other Cell phones for all reviews. Reviewers really like the sound and durability. The design and portability are also appreciated.

We analyzed user and expert ratings, product age and more factors. Compared to other Cell phones the Nokia N71 is awarded an overall alaScore™ of 81/100 = Very good quality.

Below is a list of reviews for this or similar products. If you think this grouping is wrong please click here to flag.
Read more on our FAQ’s page.
Showing 1 - 15 of 43 Show Reviews: in English | in other languages (89)

Nokia dips its toe back into the clam shell waters, with varying degrees of success.

The size of Nokia N71 is 98.6x51.2x23 mm, which is a typical size of a Symbian device, but not the size of an average clamshell. Considering its work in UMTS, we can say the size is quite well-taken. For you to compare, the feelings of this phone and...

The N71, yet another handset in the N range of multimedia rich phones, is a flip (or clamshell) phone. Nokia doesn't do these very often - the 3G N90 with the Carl Zeiss camera lens and the non 3G 6131 are the two most recent examples,

It isn't often you get time lapse photography on a mobile phone, but it is here. Nor is it often Nokia delves into clamshell country. If you are keen on either, this handset is worth checking out.

Clamshell phones are meant to be small and neat, but it seems nobody told Nokia that, and consequently the N71 is something of a beast.

The N71 has some strong points, but in the end its overall size is a big negative. It's just too large for its own good

The Nokia N71 is a state of the art 3G mobile phone that has been designed with great attention to detail. It is similar to the 6680 smartphone but the N71 has a flip open mechanism & a few different features but they both have 3G Technology & a...

Nokia N71 is another Symbian 9.1 smartphone in the collection of Nokia. The new clamshell is well equipped and is aimed in the mid-range of customers. It is based on the S60 3rd edition user interface. N71 has 3G UMTS support and can offer fast data...

Bulky sizeUnstable construction (this issue may occur only in our test sample)Slightly unhandy top part of the keypadVery small On/Off/Profiles buttonNo compatibility between older Symbian applications and Symbian 9.1

The back of the phone has a very clean design and only has a white NOKIA sign on the very top and the battery cover with its release clip. The bottom of the back side of the phone is bordered with silver plastic. The battery and the cover are one whole...

Nokia today announced that it has started deliveries of Nokia N71 to Vodafone K.K. in Japan. The "Nokia N71" is its first product to be introduced in Japan under the Nokia Nseries sub-brand, Nokia's high performance multimedia range with sophisticated...

The N71 should be available in the first quarter of 2006 for an unsubsidised cost of around €400.

To measure the speed of the N71, I used four popular Java MIDP based benchmarks: JBenchmark, JBenchmark2, JBenchmark3D from JBenchmark and SPMark06 from FutureMark. Check the results shown on the screenshots below and compare them with results from...