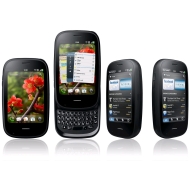 alaTest has collected and analyzed 123 reviews of Palm Pre 2. The average rating for this product is 4.0/5, compared to an average rating of 4.1/5 for other Cell phones for all reviews. Reviews about the camera and design are generally positive. The portability and performance also get good feedback. Opinions are divided on the price. There are some negative opinions about the sound and battery.

We analyzed user and expert ratings, product age and more factors. Compared to other Cell phones the Palm Pre 2 is awarded an overall alaScore™ of 86/100 = Very good quality.

Below is a list of reviews for this or similar products. If you think this grouping is wrong please click here to flag.
Read more on our FAQ’s page.
Showing 1 - 30 of 57 Show Reviews: in English | in other languages (64)

80% of the reviews on Amazon.com give this product a positive rating.

The best Pre yet, but is this touchscreen slider phone worth investing in?

The 3.1in, 320x480 pixel screen isn't an ideal size or resolution for web browsing, which is best enjoyed in landscape orientation. Adobe Flash 10.1 is supported, but embedded video playback stuttered terribly, even over Wi-Fi, and was unwatchable at...

The Plus’s woefully substandard 3MP snapper has been hiked to 5MP, but it's still alarmingly bereft of settings and modes. The LED flash is a hit-and-miss affair: it only shoots VGA video and, although the fixed focus optics take surprisingly sharp...

After a false start from Palm, is the Pre 2 the iPhone killer we were always promised?

A brilliantly integrated, user-friendly OS is let down by average hardware design and fledgling App Catalog

The Palm Pre 2 is the first Palm branded handset to come to market since HP's high-profile takeover of the company earlier this year. But, unlike the big fanfare that was created when the original Pre launched in June 2009, the Pre 2 sneaked in through...

webOS 2.0 brings with it some nice new features and there are better multitasking capabilities due to the 1GHz CPU

Build quality isn't great, and it's basically a rehash of the Palm Pre Plus

The Palm Pre 2 is a decent little smartphone which sticks to the trusted formula of previous models and adds some nice touches. However, it is hard to forge a new opinion on what is basically a re-hashed version of what we've seen before.

It doesn't look much different to what's come before, so is the Pre 2 more than just Pre Plus Plus?

One of the best OS concepts around ; Build quality ; Generally quite snappy ; Decent camera ; Good keyboard

Feels like minor update ; No improvement to screen ; Some bugginess ; Battery life ; Not subsidised

The Palm Pre 2's history starts, unsurprisingly, with the original Palm Pre. When it launched, many had high hopes for it to be the device that rivalled the iPhone for slickness and ease of use.

Announced back in October 2010 , the Palm Pre 2 is finally available from Verizon Wireless for $149.99 with a two-year contract and after a $50 mail-in rebate. On the one hand, it's wonderful to have another WebOS product on the market, especially with...

The Palm Pre 2 ships with WebOS 2.0, which brings such improvements as better multitasking and enhanced universal search.

The Pre 2 doesn't offer a lot of hardware changes over its predecessor. The smartphone can also be sluggish.

The enhancements in WebOS 2.0 make the Palm Pre 2 a very capable smartphone, but we think it's worth waiting for the HP Pre 3, which will offer hardware improvements to complement the software upgrades.

The Palm Pre 2 offers a 1Ghz processor, 5-megapixel camera, glass screen and a 'sleeker, streamlined design' with a slide-out Qwerty for when the touchscreen just won't do

An innovative UI, speedy processor, pinpoint accurate A-GPS and both an excellently responsive touch-screen and a slide-out QWERTY keyboard

Palm has done a good job with this smart-looking device, with plenty of features. It's just a shame there are so few apps on offer.

On the whole, Palm has managed to come up with an excellent device that is fun to use. But even in spite of this, Palm has not managed to address the issues that dogged its predecessor. The Palm App Catalog still needs to have more content – we can’t...

Slendertone Controller, rechargeable unit to power...
The Slendertone System + controller powers the full range of toning garments for bottom and arms £80.00 TO SHOP