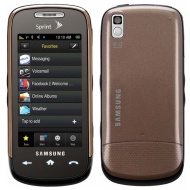 alaTest has collected and analyzed 42 reviews of Samsung Instinct HD. The average rating for this product is 3.6/5, compared to an average rating of 4.1/5 for other Cell phones for all reviews. Views about the sound and screen are on the whole positive. The camera and design are also mentioned favorably. There are some mixed opinions about the usability. Many are negative about the reliability and portability.

We analyzed user and expert ratings, product age and more factors. Compared to other Cell phones the Samsung Instinct HD is awarded an overall alaScore™ of 82/100 = Very good quality.

Below is a list of reviews for this or similar products. If you think this grouping is wrong please click here to flag.
Read more on our FAQ’s page.
Showing 1 - 15 of 37 Show Reviews: in English | in other languages (1)

20% of the reviews on Amazon.com give this product a positive rating.

The Instinct HD's camcorder is impressive, but who buys a cellphone for its video capabilities?

The Samsung Instinct HD adds high-definition video recording and playback to its popular touch-screen feature phone, but battery life takes a huge hit as a result.

Conclusions At $249.99 with a two-year contract and after a $100 mail-in rebate, the Instinct HD is an expensive phone. Fortunately, it's powerful enough to put next to Sprint's touch screen smartphones, and the data plan costs are similar. That said,...

Fans disappointed with the minor upgrades in last spring's Instinct S30 will be pleased with the Samsung Instinct HD ($250 with a two-year contract from Sprint; price as of 9/25/09). This iteration of the cell phone bumps up the features considerably:...

Must pay extra for HDMI cable ; User interface can be slow

The Instinct HD is a strong update to a great phone, but I wish Sprint would have kept the price lower and bundled the HDMI cable. To justify the handset's steep price, Sprint should have included that cable in the package. One tip for interested...

Must pay extra for HDMI cable ; User interface can be slow

The Instinct HD has a plentitude of features, but you have to pay extra to experience HD video on your TV.

Sprint Nextel stole the CTIA show last year when it introduced the Samsung Instinct. There was a lot to like about the touch-screen phone, so we were hopeful that Samsung ...

The Samsung Instinct HD offers a sleek design with an attractive user interface and a brilliant display. Its HD-capable camera is one of the best around, photo and video quality are sharp, and the loaded feature set includes Wi-Fi.

The Samsung Instinct HD was sluggish at times, and call quality isn't the sharpest. The Opera 9.7 browser takes some getting used to, and the memory card slot is located behind the battery cover, which is inconvenient. It's also quite expensive.

The Samsung Instinct HD packs a lot of features and decent performance into an appealing design. But even with all it has to offer, we'd prefer to pay less and get a full smartphone.

The Instinct family now has its third member, the Samsung Instinct HD. Unlike the s30, the HD is a true upgrade from the original, and what upgrades there are As the name indicates, the new Instinct is capable of recording HD videos, a first for the US...

The main idea behind this device is to turn your mobile lifestyle into a high definition experience, with a five megapixel camera and camcorder and HD output, which allows you to display your videos on a compatible HD television if you purchase the...

The Instinct HD is a great idea, but it doesn't quite deliver on the promise

The Samsung Instinct HD is a smartphone that emphasizes its high-resolution camera. Jen Edwards brings us a review of this touchscreen-based device, which is the first in the Instinct series with Wi-Fi.

I’m not really feeling the love for the