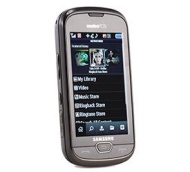 alaTest has collected and analyzed 6 reviews of Samsung R900 Craft. The average rating for this product is 2.2/5, compared to an average rating of 4.1/5 for other Cell phones for all reviews. Reviewers are impressed by the camera and screen. Some have doubts about the reliability and battery.

We analyzed user and expert ratings, product age and more factors. Compared to other Cell phones the Samsung R900 Craft is awarded an overall alaScore™ of 80/100 = Very good quality.

Below is a list of reviews for this or similar products. If you think this grouping is wrong please click here to flag.
Read more on our FAQ’s page.
Showing 1 - 5 of 5 Show Reviews: in English | in other languages (1)

MetroPCS surprised us in late September when it boldly launched the United States' first commercial LTE handset and LTE 4G network in Las Vegas and Dallas . Though the Samsung Craft has quite a few sophisticated features, it's no smartphone . It turns...

The Samsung Craft is the 4G-enabled phone for MetroPCS. It has a bright, crisp AMOLED display and it supports 32GB expandable memory and HD video playback.

The Samsung Craft's processing speeds were slow, and 3G support is limited.

The Samsung Craft is one of MetroPCS' most advanced feature phones, and its 4G capabilities are an added draw for those in the carrier's LTE markets.

Comparisons and Conclusions Right now, on MetroPCS, the Samsung Craft is the best media phone, the best camera phone, and best Web phone, but I'd recommend holding out for an upcoming LTE smartphone if you can. Your patience will be rewarded with a...

They cannot help u if u go a minute over an hour as a new customer. Corporate office have no phone numbers to contact for customer service. I was charged to exchanged the phone I had just purchased two days prior. METRO PCS SUCKS AND THE SAMSUNG CRAFT.

There are no pros with Metro PCS.

Service sucks for the new customer who has issues and the Samsung Craft is a terrible phone. I got sucked in because the phone was on sale. The battery life, there is none. Now I am stuck with the phone. I am going to T-Mobile. One week customer.

Not any I can thank of.

This phone must have been an afterthough not much of it's apps. are useable to most people. Nav. is so slow you will be there befor it can tell you where to go.