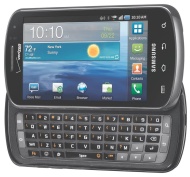 alaTest has collected and analyzed 235 reviews of Samsung Stratosphere. The average rating for this product is 2.9/5, compared to an average rating of 4.1/5 for other Cell phones for all reviews. Reviewers are impressed by the sound and design. The screen and usability also get good feedback, whereas there are some mixed views about the portability. The apps and reception get negative comments.

We analyzed user and expert ratings, product age and more factors. Compared to other Cell phones the Samsung Stratosphere is awarded an overall alaScore™ of 81/100 = Very good quality.

Below is a list of reviews for this or similar products. If you think this grouping is wrong please click here to flag.
Read more on our FAQ’s page.
Showing 1 - 164 of 225 Show Reviews: in English | in other languages (1)

alaTest has collected and analyzed 154 user reviews of Samsung Stratosphere from Amazon.com. The average user rating for this product is 2.8/5, compared to an average user rating of 3.8/5 for other Cell phones on Amazon.com. Reviewers really like the sound and design. The screen and performance are also mentioned favorably, whereas many are less positive about the apps and durability. There are some mixed comments about the reception.

47% of the reviews on Amazon.com give this product a positive rating.

Once upon a time, in the not-so-distant past, Verizon was still in phase one of its LTE lineup, which consisted of nothing but 4.3-inch slate phones with questionable battery life and very little to stand out from the rest of the competition. Now that...

The Stratosphere is a decent budget device in Verizon's LTE lineup, as well as the only full QWERTY, but you'll have to live with aging components.

Verizon is quickly becoming the king of 4G LTE phones, but it wasn't until the Samsung Stratosphere strode onto the scene that Verizon could claim a 4G phone with a physical QWERTY keyboard. Try as Samsung and Verizon might to persuade us that the...

The Samsung Stratosphere has Verizon's ultrafast 4G LTE speeds and is the first LTE phone in its arsenal to have a QWERTY keyboard. Plus, it has Wi-Fi Direct, DLNA, and VPN support. Its 5-megapixel camera takes good photos.

A sibling of the original Galaxy S line, the Stratosphere at times feels a little rehashed. Call quality was also hit or miss.

The Samsung Stratosphere's blazing 4G LTE speeds, QWERTY keyboard, and business tools lend it credence as a handset for corporate minds, but its last-season specs may fail to lure those looking for the ultimate smartphone.

The Samsung Stratosphere is currently Verizon's only keyboarded 4G LTE smartphone. It's a solid handset, but both better Android and 4G options are available.

Battery life is still not a strong point for 4G LTE devices. Streaming content over 4G, the Stratosphere lasted for just 2 hours and 47 minutes. That's not great, but it's about average for now. Talk time was better, at 6 hours and 14 minutes.

The Samsung Stratosphere has a lot to offer corporate users who want an Android smartphone with a tactile QWERTY keyboard.

We've seen Verizon release quite a few 4G LTE Android smartphones over the past couple of months, from the high-end Motorola DROID BIONIC and HTC ThunderBolt, to the entry-level Pantech Breakout. But there is one feature that all of them have been...

The Samsung Stratosphere on Verizon makes the 4G LTE a real option for the numerous smartphone owners who need a physical keyboard.

While I wouldn’t recommend the Samsung Stratosphere to smartphone buyers who want the latest and greatest, the ability to purchase it for as low as a penny, even for existing customers, makes it an attractive budget 4G LTE smartphone. It is certainly a...

We live in a world of large displays and touchscreen keyboards. As phones continue to evolve, it seems as though physical keyboards and smaller screens are fading out. Not everyone is enthralled by ...

The Samsung Stratosphere performs like a high-end device while introducing itself and costing like a mid-range one. It will be a favorite among QWERTY keyboard purists who haven’t quite made the transition to touchscreens full-time. It still boasts one...

The Samsung Stratosphere for Verizon is the carrier's first 4G LTE phone with a full, physical slide-out keyboard and in this review, we'll determine if this Samsung smartphone can keep up with the flood of awesome 4G LTE coming to the market. Read on...

Verizon 4G LTE is blazing fast ; TouchWiz is a pleasant Android experience ; Only game in town if you want 4G LTE with full keyboard

Keyboard could have better feedback ; Somewhat boring design ; Not top of the line hardware

The Samsung Stratosphere isn't the most exciting 4G LTE phone, as those wanting cutting-edge hardware, design and fabulous cameras will probably be happier with the Droid Razr, HTC Rezound or the Samsung Galaxy Nexus but the device will please those...

Whereas most U.S. carriers were satisfied with one Galaxy S device, Verizon just can't get enough. Along with the standard Galaxy S model that Samsung made for several wireless carriers, Verizon also picked up the Continuum, a Galaxy S phone with a new...

The Samsung Stratosphere launched at the CTIA tradeshow this week, and I was on-hand to try this new smartphone out. What makes this Android device interesting is it's the first that supports Verizon's 4G LTE service and also has a physical keyboard

The Samsung Stratosphere is shaping up to be a decent offering from Verizon. The price is good, and it will have the features I know many of you are interested in. We'll know more after it hits store shelves, and we get in a review unit for in-depth...

Samsung Galaxy A70 SIM Unlocked (Brand New), Blue /...
The gap between flagship smartphones and budget smartphones keeps getting shorter and nothing proves it... £338.00 TO SHOP