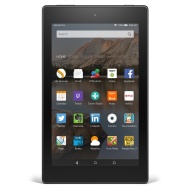 alaTest has collected and analyzed 380 reviews of Amazon Fire HD 8 (2018). The average rating for this product is 4.5/5, compared to an average rating of 4.2/5 for other products in the same category for all reviews. Reviewers really like the storage and usability. The battery and durability are also appreciated. There are mixed comments on the portability and screen. The GPS navigation and size get critical opinions.

We analyzed user and expert ratings, product age and more factors. Compared to other products in the same category the Amazon Fire HD 8 (2018) is awarded an overall alaScore™ of 96/100 = Excellent quality.

Below is a list of reviews for this or similar products. If you think this grouping is wrong please click here to flag.
Read more on our FAQ’s page.
Showing 1 - 10 of 341 Show Reviews: in English | in other languages (38)

Amazon Fire HD 8 Kids Edition review: The best tablet for kids out there right now, thanks in part to the Fire for Kids app subscription and a robust case.

The best kids' tablet so far – although it isn't without its faults. Namely software compatibility troubles and the mediocre hardware underneath.

Amazon Fire HD 8 Kids Edition review: The best tablet for kids so far – although not without its faults.

The best kids’ tablet so far – although it isn’t without its faults.

The Amazon Fire HD 8 is one of the cheapest tablets you can buy from a recognisable brand. It costs around £79.99, and unlike similarly priced Android slates it's not completely terrible.

You'll have to pay a lot more to do better

The fact the Amazon Fire HD does everything it says it will is reason enough to be impressed. You’ll have to pay a lot more to do better

An impressive budget tablet from Amazon...

Screen lacks sharpness and contrast ; You’ll need to be a Prime member to get the most out of it ; Poor cameras

Needs an Amazon Prime subscription for the full experience, but even without Prime, you’ll struggle to find a better performing tablet at this price

If you don't mind the hard sell, this is how budget tablets should be done...

Music could be better organised ; No Google Play

If you don’t mind the Amazon hard sell, this is a good budget tablet that balances its compromises cleverly

The Fire is still a very hot prospect, especially at this price

Whether you're a globetrotter or a looking for an travel tablet or something to entertain your child with loads of controls, the Fire HD 8 is well

Reflective display ; Slow to charge ; Not the snazziest of tablet specs

Along with a new 4K Fire TV and a cheap as chips £50 tablet, Amazon has also introduced two new devices at the upper end of its range that are better geared for those who want a bit more oomph, a better screen and slimmer profile than ever before.

Making a great tablet is no easy task. Moving on from their initial sales boom post-2010, slates have begun to coalesce into a number of discrete segments – with the ‘tablet’ in its purest sense disappearing at a rapid pace. For the...

The Amazon Fire HD 8 (2018) bets big on its Alexa skills and low price, and mostly succeeds in making a positive first impression. But with laggy performance, poor software and a mediocre screen, it isn’t an easy recommendation even when this cheap.