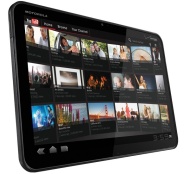 alaTest has collected and analyzed 1484 reviews of Motorola XOOM. The average rating for this product is 4.2/5, compared to an average rating of 4.2/5 for other products in the same category for all reviews. People really like the battery and price. The screen and performance also get good feedback. Opinions are divided on the reliability. Many are less positive about the apps and portability.

We analyzed user and expert ratings, product age and more factors. Compared to other products in the same category the Motorola XOOM is awarded an overall alaScore™ of 89/100 = Very good quality.

Below is a list of reviews for this or similar products. If you think this grouping is wrong please click here to flag.
Read more on our FAQ’s page.
Showing 1 - 151 of 1152 Show Reviews: in English | in other languages (199)

94% of the reviews on Amazon.co.uk give this product a positive rating.

alaTest has collected and analyzed 93 user reviews of Motorola XOOM from Amazon.com. The average user rating for this product is 4.2/5, compared to an average user rating of 4.1/5 for other products in the same category on Amazon.com. People really like the screen and usability. The performance and price are also mentioned favorably, but there are some mixed views about the size. Some have doubts about the battery and portability.

85% of the reviews on Amazon.com give this product a positive rating.

Motorola Xoom Review: The latest tablet computer to hit the market, is fast and well built, but a little bit of a bugger to play with and way too overpriced

A worthy adversary to the iPad, if something of a work in progress: it should only get better

Some motion issues with browsing and video; needs more apps; no iTunes-equivalent

Honeycomb doesn't feel quite ready, microSD card not supported, Motorola don't bring anything extra from a software point of view

Scoring the Motorola Xoom is something of a challenge as at the moment it isn’t delivering the experience it could, that much clear. But it has potential oozing from every pixel. Taking into account that there is some tweaking to be done on the...

The first Android Honeycomb has created a buzz, but can the Xoom sting Apple where it hurts?

Brilliant, beautiful and buggy, this giant leap into the future of tablets is everything the iPad isn’t. And that’s mostly a good thing

Brilliant, beautiful and buggy, this giant leap into the future of tablets is everything the iPad isn't. And that's mostly a good thing

Until now, Android tablets have shipped with various versions of the OS, all of which have been designed to power mobile phones. The Xoom is the first to run Android 3.0, nicknamed Honeycomb, which is

A palpable sense of excitement fills the air when you're around Motorola's first tablet device, the Xoom. Not least because it has a form factor that could

The first Android 3.0 tablet arrives to challenge the iPad 2

Few tablet apps yet ; Fiddly to hold ; Expansion slot has issues ; No Flash support - yet ; It's expensive

The Motorola Xoom tablet is easily the best competition Apple's iPad has ever seen. Sporting a 10.1-inch screen, front and rear cameras, HDMI output, a dual-core processor, and Google's tablet-optimized version of Android, the Xoom is entering the...

It's expensive, slightly heftier than the iPad, and novice users may balk at Android 3.0's read-the-manual attitude. Adobe Flash not yet supported.

The Xoom's spec sheet is enough to make any tablet tremble, but the price is high and Google still has some work to do before its tablet software experience is as fleshed out and intuitive as Apple's.

Android 3.0 makes Google-based tablets much easier to use, but the Xoom isn't quite as smooth as the Apple iPad 2.

The Motorola Xoom finally arrives in the UK under a burden of expectation. First of all it's the first tablet to hit the shelves that's running on Android 3.0 Honeycomb – aka the first edition of Android…

Motorola Xoom 2 Folio and Keyboard with UK/EU Clips
Compatible with Xoom 2 10" only £63.00 TO SHOP

Motorola Loudspeaker for Xoom Dock
Access apps and videos while charging your Motorola Xoom £71.00 TO SHOP