alaTest has collected and analyzed 250 reviews of Samsung JS95xx (2015) Series. The average rating for this product is 4.2/5, compared to an average rating of 4.3/5 for other products in the same category for all reviews. People are impressed by the design and durability. The usability and color also get good comments, whereas many are critical about the reliability and price.

We analyzed user and expert ratings, product age and more factors. Compared to other products in the same category the Samsung JS95xx (2015) Series is awarded an overall alaScore™ of 94/100 = Excellent quality.

Below is a list of reviews for this or similar products. If you think this grouping is wrong please click here to flag.
Read more on our FAQ’s page.
Showing 1 - 80 of 162 Show Reviews: in English | in other languages (52)

alaTest has collected and analyzed 6 user reviews of Samsung JS95xx (2015) Series from Amazon.co.uk. The average user rating for this product is 3.7/5, compared to an average user rating of 4.3/5 for other products in the same category on Amazon.co.uk. Reviewers really like the glare and usability. The remote control and price are also mentioned favorably, whereas many are less positive about the reliability.

67% of the reviews on Amazon.co.uk give this product a positive rating.

0% of the reviews on Amazon.ca give this product a positive rating.

The UE78JS9500 could just be a home cinema fan's dream come true. After all, it takes the ground-breaking high dynamic range (HDR), native UHD/4K resolution and Tizen smart TV features of the recently tested UE65JS9500 and shoves them into a...

It's prohibitively expensive ; Traces of blooming around bright objects ; Crosstalk with 3D

It's become pretty much customary now for Samsung to try and set the TV pace every year by being first to market with its new flagship TV. And the Korean company has thrown everything at the 65-inch Super UHD UE65JS9500 – it has HDR (high dynamic...

It's not cheap ; Native UHD and especially HDR content in short supply ; The curve won't suit everyone

If you value outright detail, this pricey 4K TV might be worth a splurge

Bezel can be distracting

Another showstopper from Samsung. Believe it or not, this pricey telly is worth every penny

The heady combination of a 4K picture with high dynamic range images makes this an outstanding television.

According to Samsung, the 65-inch JS9500 is more than just a UHD TV; it's an SUHD TV. It's tempting to imagine that the extra S stands for "super", although Super Ultra High-Definition might sound a bit much, and Samsung's marketing division is keen to...

SUHD technology delivers 4K pictures of extreme brightness and colour, ideally suited to the upcoming HDR era; smart system works well once you get used to it too; easily upgraded to support future formats and connections

Expensive for an LCD TV; curved screen could be divisive - certainly its reflectivity could be an issue with light sources directly opposite; occasional light bloom around very bright objects (has the potential to be exaggerated by certain HDR sources)

While the Samsung UE65JS9500 isn't quite perfect, if you can install it so that you're not too affected by its reflection issues then its picture strengths far outweigh its flaws.

For Samsung, 4K is yesterday's news. Old hat. Water under an ultra high-definition bridge. The brand is already on to the Next Big Thing. What's more, this Next Big Thing isn't just something creeping into ‘concept corners' at technology shows. It's...

It’s very expensive; curved design is divisive; no native HDR content yet, not much 4K either

Introducing the future of television

With its high dynamic range (HDR) compatibility and native 4K resolution the UE65JS9500 is almost too futuristic for its own good given the current shortage of native HDR and 4K content. But it's also so damn brilliant that we'd recommend you save up...

Move over Galaxy Note 4, SUHD is Samsung's next big thing

Refresh rate ; Going to be expensive

Samsung's first SUHD TV is wildly impressive and even has the numbers to support it. In spite of that fact though there are still too many unknowns (ahem, price) to guarantee that it's worth its inevitably expensive price tag.

Samsung's best TV yet is stylish, expensive and packed with the latest cutting-edge features to improve LCD picture quality. But can it compete against OLED?

The Samsung UNJS9500 series produces one of the best pictures of any LED LCD we've tested, with excellent contrast, deep black levels and superb color and video processing. It can get brighter than OLED TVs. The redesigned Smart TV system and remote...

The ultra-expensive JS9500 costs around the same as OLED TVs that deliver overall better image quality. Unlike OLED, its picture suffers when seen from off-angle, and blooming is visible in some scenes. It's only available with a curved screen.

Despite being an excellent example of LCD TV state of the art, Samsung's high-end JS9500 loses the picture quality battle against OLED TVs. 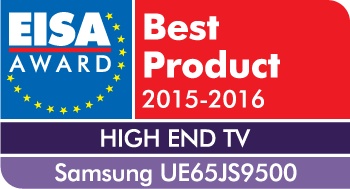