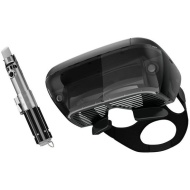 alaTest has collected and analyzed 33 reviews of Lenovo Star Wars. The average rating for this product is 3.7/5, compared to an average rating of 4.5/5 for other products in the same category for all reviews. Reviewers are impressed by the reliability. The design is also appreciated. Some have doubts about the usability, while comments are divided on the price.

We analyzed user and expert ratings, product age and more factors. Compared to other products in the same category the Lenovo Star Wars is awarded an overall alaScore™ of 92/100 = Excellent quality.

Below is a list of reviews for this or similar products. If you think this grouping is wrong please click here to flag.
Read more on our FAQ’s page.
Showing 1 - 10 of 24 Show Reviews: in English | in other languages (9)

Phone gets hotter than a Tatooine summer ; Holochess is a bit dull

A delicious augmented-reality setup that will delight Star Wars fans.

Complicated to set up ; Keeping three devices charged ; Fun initially, but wears off

The Lenovo Star Wars: Jedi Challenges is a fantastic idea that is clearly a first-gen product. But Lenovo is definitely on to something and with a bit of hardware and software updates, it could turn into an ultimate toy for Star Wars fans Star Wars:...

At £249 in the UK this is a fairly pricey experience. Even pricier if you consider you'll need two complete sets to take on a second player in a

Star Wars Jedi Challenges review: The must-have for the Star Wars-obsessed is now a LOT cheaper

Lenovo's Mirage AR headset is the best case for AR yet

Excellent and innovative use of technology ; One of the best AR experiences yet ; Packed full of Star Wars fan service

No proof it’ll be used beyond Jedi Challenges ; A lot of money for a single use

Despite my concerns about price, it’s obvious that many Star Wars fans will pay up, simply for the opportunity to be a Jedi. But if you’re simply curious about AR, I’d advise waiting until Lenovo or Disney make it clear they’re going to support the...

"This is epic!" So said my son when I strapped the mirrored headset to his face and stood off to the side as he swung a lightsaber in the air. He was fighting battle droids. I was making sure he didn't break anything.

The self-contained headset is wireless and generates some decent holographic effects. Will run on even some older iPhones and Android phones. A good handful of challenges and game modes. Comes with its own lightsaber hilt.

Doesn't always track your movements or the lightsaber very well. Lightsaber sometimes drops up out of sync. Requires a phone. Inserting and setting up the phone isn't easy or quick. Who knows if this will ever run other games?

Lenovo's AR helmet for phones feels like a clever mini-HoloLens for Star Wars fans, but as a standalone headset with no other software, it's a tough sell.

We've strapped on Lenovo's Mirage AR headset and got a tight grip on our lightsabers for this full review of the Star Wars Jedi Challenges,...

The Lenovo Star Wars Jedi Challenges VR set would make an engrossing Christmas present for any fans out there, especially as they’ll no doubt be hyped to the eyeballs over Episode VIII. It’s not cheap of course, costing £250 here in the UK, which is...

Forget Microsoft's 'mixed reality', being a Jedi in AR is way more fun. We got hands-on with the Lenovo Star Wars Jedi Challenges inside the Mirage headset.

We've only played a short demo of the Jedi Challenges but our first impressions are good. Lenovo's Mirage AR headset is comfortable and the Lightsaber feels great. Well put the bugs down to the IFA show floor lighting. For Star Wars fans, this is...

Lenovo's Mirage AR headset is the best case for AR yet

Now comes the tough question, is it worth it? It’s undeniable that Star Wars: Jedi Challenges is a lot of fun, but asking £250 for the privilege is a bit much. If Disney and Lenovo had managed to bring the price down to £100, or even £150, it would be...

Star Wars: Jedi Challenges headset turns you into a Jedi Master as you battle Sith Lords in AR

Comprised of an AR headset, tracking bulb and lightsaber hilt, you can now dive into an AR world of Star Wars