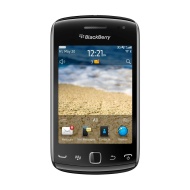 alaTest has collected and analyzed 294 reviews of BlackBerry Curve 9380. The average rating for this product is 3.7/5, compared to an average rating of 4.1/5 for other Cell phones for all reviews. Reviews about the performance and design are on the whole positive. The screen and portability are also appreciated. Some have doubts about the social networking functionality and reliability. There are mixed opinions on the durability and size.

We analyzed user and expert ratings, product age and more factors. Compared to other Cell phones the BlackBerry Curve 9380 is awarded an overall alaScore™ of 85/100 = Very good quality.

Below is a list of reviews for this or similar products. If you think this grouping is wrong please click here to flag.
Read more on our FAQ’s page.
Showing 1 - 72 of 168 Show Reviews: in English | in other languages (53)

alaTest has collected and analyzed 45 user reviews of BlackBerry Curve 9380 from Amazon.com. The average user rating for this product is 3.9/5, compared to an average user rating of 3.8/5 for other Cell phones on Amazon.com. People really like the portability and price. The usability and performance are also appreciated, whereas many are less positive about the reliability.

82% of the reviews on Amazon.com give this product a positive rating.

Yet more phones emerging from the BlackBerry camp, in what appears to be a veritable river of BlackBerry 7 packing handsets flooding our phone shops. Next

A touchscreen BlackBerry Curve at last

Low screen resolution ; A few performance issues ; OS has lots of rough edges ; Keyboard is a bit fiddly ; Some poor social integration, too

After playing it cool for a few years, RIM has apparently decided that there's something to this touchscreen phone lark after all, releasing a budget all-touch device in the shape of the BlackBerry Curve 9380.

In a sense, the BlackBerry Curve 9380 is one of the most interesting phones we've seen from RIM in a while. Though it's specifications aren't cutting edge and it doesn't immediately scream ‘Phone…

The very first touch-only BlackBerry Curve smartphone lands on our shores - is it good enough to forgo one of the best QWERTY keyboards in the business?

The Curve brand has been hugely successful for RIM, especially the 8520 mega-hit; these were the first BlackBerries that appealed to the masses on a budget, allowing the everyman a taste of BBM and the famed BlackBerry keyboard. Alongside...

Review Perhaps sensing that it's on the verge of losing the smartphone battle, BlackBerry manufacturer RIM has all but swamped the market recently with a rash of handsets, each offering something a little bit different. The Curve 9380 is the midrange...

The BlackBerry Curve 9380 betrays its lower end leanings with a fairly low resolution screen and underpowered processor, but it’s got a decent camera and messaging capabilities. The lack of content on BlackBerry App World will be a frustration for some...

RIM's recent burst of handsets would almost put HTC to shame fortheir diversity and frequency. The Curve 9380 is the midrangeversion of the Torch 9860 -- a full face touch screen design butsmaller, lighter, and a little bit cheaper.

It's horses for courses, but if you don't want the bulkof its larger cousin, the Curve 9380 offers a slick little packagewith a decent range of features so long as you're not expectingespecially high performance.

The Blackberry Curve 9380 is a cheaper handset with OS 7 and a touchscreen, but it lacks some of the classic BlackBerry features

Anyone looking to update their Curve for a touchscreen device will find the 9380 offers a comfortable and familiar option. It may not be as durable as some devices, but it is small and light. However, there's not much in the way of entertainment or...