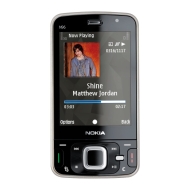 alaTest has collected and analyzed 1612 reviews of Nokia N96. The average rating for this product is 3.7/5, compared to an average rating of 4.1/5 for other Cell phones for all reviews. Comments about the portability and screen are on the whole positive. The camera and size also get good feedback. Some have doubts about the price and durability, while there are some mixed comments about the apps.

We analyzed user and expert ratings, product age and more factors. Compared to other Cell phones the Nokia N96 is awarded an overall alaScore™ of 86/100 = Very good quality.

Below is a list of reviews for this or similar products. If you think this grouping is wrong please click here to flag.
Read more on our FAQ’s page.
Showing 1 - 78 of 816 Show Reviews: in English | in other languages (619)

alaTest has collected and analyzed 68 user reviews of Nokia N96 from Amazon.co.uk. The average user rating for this product is 2.8/5, compared to an average user rating of 4.1/5 for other Cell phones on Amazon.co.uk. Reviews about the reliability and screen are overall positive. The design and price are also mentioned favorably, whereas reviews are divided on the portability. Some have doubts about the camera and usability.

51% of the reviews on Amazon.co.uk give this product a positive rating.

Can the N96 build on the success of the N95 8GB, or will it be out classed by the ever improving competition?

Having announced the Nokia N96 some 6 months ago, we'll forgive you for being surprised that the handset has only just made it into the shops. So should you be rushing for it, or has that 6 months wait meant something better has come along? Rather than...

No touchscreen, TV tuner won't work in the UK

The N96 is an evolution and refinement of the Nokia N95 rather than a whole new model, but seeing as the original phone was very good to start with (it was voted Best Mobile Phone at the 2007 Pocket-lint Awards) this isn't a bad thing. The larger...

Nokia has updated its flagship Nseries handset, the N95 with the N96, but is it mere tweaks and fixes or something that you should look to upgrade to? Pocket-lint managed to get a hands on with the new phone at this year's Mobile World Congress in...

Review: Another great multimedia phone from Nokia - but isn't it much the same as the last one?

Plasticky bodywork ; Not a huge upgrade from the N95 ; No touchscreen control

Like its predecessor, it's a great multimedia phone, but not necessarily good enough to trade in your N95 for

The N96 differs from many recent smartphones in having neither a touch screen nor a keyboard.

The Nokia N96 caused quite a commotion when it first debuted at GSMA 2008 in February, but as with most of Nokia's high-end phones, it took a little while for the smartphone to make its way to the United States. Consequently, new products have come out...

The Nokia N96 features 16GB of storage and advanced multimedia features, including a 5-megapixel camera. The smartphone also has integrated Wi-Fi, Bluetooth, GPS, and 3G support.

The N96 froze on a couple of occasions and can sometimes be sluggish. Nokia's Ovi services aren't fully activated in North America, so you can't take advantage of those extra capabilities. It's also expensive.

Though the Nokia N96 is a powerful all-in-one smartphone with an impressive amount of user storage, it's not a significant upgrade to the N95 and is outdone by new devices coming to market, including the Nokia N97.

This highly anticipated successor to the Nokia N95 is packed with features but is it what we've been waiting for? Some of the improvements look great on paper but we were keen to get our hands on it to…

Nokia is upping the ante in the mobile phone stakes again, this time with TV as the killer app. The Nokia N96 is a multimedia handset with a 5Mp camera and Mpeg4 video filming – and it's equipped for future live mobile TV broadcasts.

We think Nokia has another hit on its hands – the GPS capabilities of the N95 have been honed further, although it remains to be seen how well the Nokia N96's mobile TV service will fare when it airs.