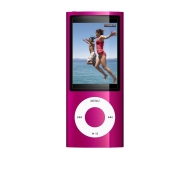 alaTest has collected and analyzed 7722 reviews of Apple iPod nano (5th Gen, 2009). The average rating for this product is 4.3/5, compared to an average rating of 3.9/5 for other products in the same category for all reviews. Reviews about the sound and size are generally positive. The design and portability are also appreciated. Reviews are divided on the reliability. There are some negative reviews about the connectivity.

We analyzed user and expert ratings, product age and more factors. Compared to other products in the same category the Apple iPod nano (5th Gen, 2009) is awarded an overall alaScore™ of 97/100 = Excellent quality.

Below is a list of reviews for this or similar products. If you think this grouping is wrong please click here to flag.
Read more on our FAQ’s page.
Showing 1 - 5183 of 6195 Show Reviews: in English | in other languages (1500)

alaTest has collected and analyzed 890 user reviews of Apple iPod nano (5th Gen, 2009) from Amazon.co.uk. The average user rating for this product is 4.4/5, compared to an average user rating of 4.0/5 for other products in the same category on Amazon.co.uk. Comments about the design and portability are overall positive. The price and sound also get good feedback, but some have doubts about the reliability.

92% of the reviews on Amazon.co.uk give this product a positive rating.

alaTest has collected and analyzed 4283 user reviews of Apple iPod nano (5th Gen, 2009) from Amazon.com. The average user rating for this product is 4.3/5, compared to an average user rating of 3.8/5 for other products in the same category on Amazon.com. Reviewers really like the sound and size. The price and portability are also mentioned favorably. There are some less positive views about the connectivity and reliability.

89% of the reviews on Amazon.com give this product a positive rating.

The addition of a video camera makes this Apple's best nano yet.

The 5th gen iPod nano is inarguably Apple's best yet. It's still more expensive than its peers, but it's got more style than any rival and the addition of a video camera gives it more than a modicum of substance too.

Does the world's most popular iPod really need an FM radio and a video camera?

Apple's latest iPod Nano weighs just 34g and is no thicker than a pair of £1 coins, but Apple has squeezed in an FM radio and a video camera alongside its media playback features.

Apple's latest iPod Nano is impressively slim, but audio quality and battery life could be better, while some of the extras feel gimmicky.

The Nano 5G has lined up its crosshairs on Flip-style video cameras. Is it ready to become the world's most popular mini camcorder?

The iPod Nano MP3 player continues Apple's legacy of packing a multitude of features into a colorful, impossibly thin design and comes reasonably priced at $149 (8GB) and $179 (16GB). This time around, Apple is branching out of its iPod formula in a...

Packed to the gills with new audio-video features such as a video camera, FM radio, voice recording, Genius Mixes, a built-in speaker, and a larger 2.2-inch screen; also gets a pedometer.

The Nano's camera can't shoot photos or HD-quality video and Apple located its lens in the most awkward location imaginable. Storage capacities remain stuck at 8GB and 16GB.

No other MP3 player on the planet packs more features, from video to a pedometer, into a smaller package than the overachieving Apple iPod Nano.

A highly capable and affordable performer in its previous two iterations, the fifth-generation (5G) iPod nano adds useful and entertaining features such as a video camera and microphone mounted on the back of the iPod, an FM radio with buffering and...

The 4G iPod nano was an incremental update to the 3G nano that preceded it - new form, new colours, better storage, Genius playlist support, Spoken Menus, and an accelerometer. A fine, but hardly earthshaking, update. The 5G iPod nano is different. A...

The Nano 5G has lined up its crosshairs on Flip-style video cameras. Is it ready to become the world's most popular mini camcorder?

Appleâs smallest screen-based player gets a video camera MORE: See our video review of the Apple iPod Nano After an ill-advised foray into square-shaped designs, Apple returned to the more ...

I've spent quite a lot of time with the latest 5th generation of the iPod Nano since its release last month, and found it to be a welcome addition to Apple's holiday line-up with a host of welcome features including what must be Apple's most leaked...

All things considered, the new 5th generation iPod Nano is well worth taking a look at if you want to upgrade your iPod, but I wouldn’t upgrade if I had a 4th generation Nano, as the new features, personally, don't justify the purchase of another new...

Apple iPod Nano 16GB Pink (7th Generation) NEWEST...
A Certified Refurbished device is a pre-owned device that has been refurbished, tested, and certified by... £179.00 TO SHOP