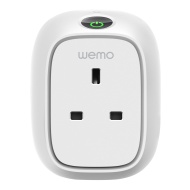 alaTest has collected and analyzed 642 reviews of Belkin Wemo Insight Switch Smart Plug. The average rating for this product is 3.3/5, compared to an average rating of 3.6/5 for other products in the same category for all reviews.

We analyzed user and expert ratings, product age and more factors. Compared to other products in the same category the Belkin Wemo Insight Switch Smart Plug is awarded an overall alaScore™ of 73/100 = Good quality.

Below is a list of reviews for this or similar products. If you think this grouping is wrong please click here to flag.
Read more on our FAQ’s page.
Showing 1 - 461 of 469 Show Reviews: in English | in other languages (2)

74% of the reviews on Amazon.co.uk give this product a positive rating.

64% of the reviews on Amazon.com give this product a positive rating.

Belkin's WeMo home automation products offer the ability to control your home electronics from anywhere, and the WeMo Switch + Motion might be the most attractive package of the bunch. If it has a plug, you can plug it into the WeMo -- a lamp, a...

The Belkin WeMo Switch + Motion's relatively low price, lack of a subscription fee, and plug-and-play simplicity will appeal to many budding home automators.

IFTTT automations weren't quite as reliable as we'd like, and it was a challenge to find ones that we'd actually use regularly.

The Belkin WeMo Switch + Motion is a fun, wallet-friendly step toward the long-promised home automation revolution.

If it has a plug, then Belkin and IFTTT can make it smarter.

The Belkin WeMo Switch + Motion's relatively low price, lack of a subscription fee, and plug-and-play simplicity will appeal to many budding home automators.

IFTTT automations weren't quite as reliable as we'd like, and it was a challenge to find ones that we'd actually use regularly.

The Belkin WeMo Switch + Motion is a fun, wallet-friendly step toward the long-promised home automation revolution.

Are those extras worth the $10 price premium? The smaller housing is more visually appealing than the original. For many people that alone will be enough. The energy consumption tracking won't be useful for everyone, but thanks to IFTTT, I can see...

Setup remains a hassle, it's still large enough to block adjacent outlets, and reliance on IFTTT for advanced programming functions means you'll need to bounce between two different apps to get the most out of the Switch.

Despite a few usability quirks, Belkin's WeMo Insight Switch only improves on the simple, low-risk formula that made Belkin's original programmable WeMo Switch so appealing as a home automation starting point.

The easy-to-use, widely compatible Belkin WeMo Insight Switch is the best smart switch outlet adapter to plug in and get you started with smart-home automation.

After spending a lot of time plugging in, unplugging, and flipping switches and punching in Wi-Fi passwords we’ve come to the conclusion that if you want to control devices remotely, the Belkin WeMo Insight Switch is your best bet. It’s compact,...

I have already got a few of these. They work perfectly with IFTTT and Alexa.

Excellent design and practically easy set up And works a treat

Have not had this product for long. So far I have been pretty pleased with it. The design could be more compact but then again there is a newer model available.

Software is buggy. It has one job and can't do it

Doesn't understand daylight savings time. Can't turn on when setting on or off using sunrise or sunset. Lot's of bugs with the iOS app. They need to spend a lot more time on the software side

Hive Active Plug, Silver, 2 Pack
Simple Installation - Simply plug it into your wall socket and then plug appliances into it as normal £78.00 TO SHOP

TP-Link Accessory HS105 KIT Smart Plug Mini Sized Wi...
Control from anywhere: Turn electronics on or off from anywhere with your smartphone using the kasa app... £51.00 TO SHOP

Smart Plug WiFi Outlet Compatible with Alexa, Echo...
【Remote Control】 Even when you are not at home, you can control the power-on/off via Smart Life app, which... £59.00 TO SHOP